I heard on the news that an oil train had derailed in Mosier, Oregon, causing a fire that threatened to take out the whole town.

Mosier is located on a hillside on the south side of the Columbia River with only Hwy 84 and the Union Pacific railroad tracks between it and the river. The tracks run right next to the main street of Mosier.

Knowing that my town of Chico, California also has oil trains running through it, I wanted to find out what damage had occurred to Mosier from the oil spill and resultant fire. I wanted to talk to some Mosier residents, to ask questions about the derailment, to find out how they felt about it.

The first resident I met in Mosier was the wind. I felt the force of it the instant I stepped out of the car. The wind in Mosier is strong and incessant. In summer it blows without cease up the Columbia River Gorge from the west, churning the river’s surface. In winter, it blows hard and cold from the east. While recording people’s testimony their voices were often distorted and drowned out by the wind. 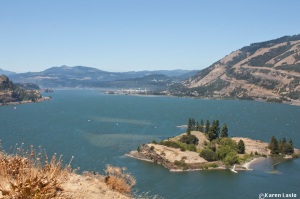 On June 3rd, the day of the derailment, when the strewn oil tank cars irrupted into flames and oily black smoke rose into the sky (see link below), the wind didn’t blow. It had blown hard the day before and hard again the day after. Had the wind blown, Mosier would have vanished in an unstoppable advance of flames. The little elementary school and the trailer park, located just above the derailment, were quickly and efficiently evacuated. Realizing the disastrous consequences they so narrowly escaped, the people of Mosier know better than anyone how lucky they were.

Nelly Demosthenes has owned the local ice cream and coffee shop for 20 years. She intends to leave Mosier because “It’s too dangerous. It will happen again.”

Standing outside of the Volunteer Fire Dept. building, I talked with Jim Appleton, Mosier’s Fire Chief. A man of modest and serious demeanor, he hadn’t wanted the public attention that has been brought to bear upon him. And he hadn’t wanted the weight of the decisions he’s had to make as Fire Chief. But to look him in the eye is to know that he will see the task through to the end. 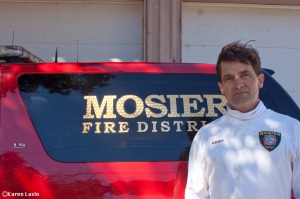 Appleton greatest responsibility as Fire Chief is to keep his townspeople safe from fire. But in the event of another derailment, he knows that as well trained and organized as the small Mosier Volunteer Fire Dept. is, he can’t insure the safety of his community because the next derailment could happen on a day when the wind in Mosier is blowing and when the support agencies available on the day of the June 3rd derailment may be occupied with other emergencies. In that case an oil train fire could take out the whole town, spreading into a catastrophic wild-land fire, and nothing could be done to prevent it. As it was, it took the firefighters 8 hours, 40 trucks and an expenditure of water at a rate of a thousand gallons a minute just to cool down the derailed tank cars. 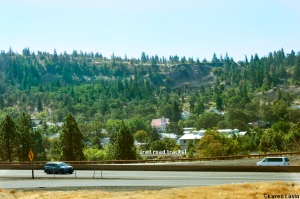 Mosier as seen from Hwy 84.

Appleton pointed out that we just don’t know what effect the stress of these “monolithic oil trains” has on the rail tracks (see link below). The official cause of the Mosier derailment was the consequence of something as simple and basic as a sheared-off “lag” bolt (see link below), a finding that gives credibility to Appleton’s concern about the vulnerability of the rail tracks to the stresses of oil transport. Who knows what will give way next?

Appleton further believes that the National Transportation and Safety Board should investigate all major train derailments, as thoroughly as they do plane crashes. The Mandate Oil Spill Inspections and Emergency Rules (MOSIER) Act, introduced by Oregon Senators Merkley and Wyden would do just that. The MOSIER Act (see link below) would also require that the most volatile components of the crude oil be removed before shipping. Appleton’s hope is that the MOSIER Act would ultimately make it unprofitable to ship crude oil by rail to terminals on the west coast, like the one proposed to be built in Vancouver, WA. 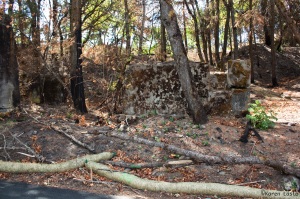 Mosier is located just above these charred trees.

Appleton supports the MOSIER Act because it would put the risk management on the shippers of crude oil. As it now stands, the risk management is put on the communities that the trains run through. The shippers (oil companies) share none of the risk and reap all of the profits from sending the volatile crude oil clacking along the railroads of our country through vulnerable little towns, cities, canyons, valleys and waterways to our sensitive coastal communities.

Oil train fire site. Before the oil fire, this area was covered in lush green vegetation. At least thirty trees were lost.

Before the derailment, Appleton was “reluctantly accepting” of the oil trains that came through his town because he thought there was “nothing anybody could do about them.” But now, a month later, his view has changed. He now believes that no “oil bomb trains” should be allowed on the tracks until they can be proven safe, which he doesn’t think they can. His present determination is that if they can’t be made safe then crude oil transport by rail should be deemed illegal. He reasons that as a shift to tighter legislative requirements starts to occur we’ll see the requests for new permits to ship crude oil by rail start to decrease.

New tracks were replaced immediatley so trains could continue to run.

What Appleton resents is that the oil passing through his town is ultimately being shipped abroad for the sake of profit, and not being used for something essential here in our own country. “Then I could say to my community, you know, as horrible as this is, there is a greater good that’s being served. Instead I’m forced to tell my community that we have to accept this because share-holder value is more important than the terror we’ve been through.”

Practically every business in Mosier is located within a hundred feet of the railroad tracks. One of these is the Rack and Cloth a local restaurant where I met Peny Wallace, who’s been on the Mosier City Council for fifteen years. Wallace told me that there were 96 cars filled with Bakken crude oil, 16 derailed, 4 caught on fire, and 10,000 gallons of crude oil was dumped into the town’s sewage plant, from which a small amount leaked into the Columbia River. Wallace questions whether crude oil can safely be shipped through anyone’s neighborhood or town or along such an important waterway as the Columbia River. She said that the town had warned “officials” for many years of the potential for a disastrous accident. Yet when the disaster did finally occur, despite leaving Mosier victim to all these fearful damages, Peny Wallace still considers she and her townspeople “very, very lucky” that the wind wasn’t blowing its usual 15- 20 miles an hour that day.

Both Fire Chief Appleton and City Councilor Wallace have advised other communities that have oil trains running through their towns to get educated about oil trains and to keep in touch with other towns who have the same problem. Wallace says, “We all need to be much more energy conscious. Maybe we need to look at wind and solar a lot more for our energy needs.” It would be ironic that the wind in Mosier that could have aided the train fire in destroying the town could become its salvation from the danger of the oil trains.

These signs have begun to be displayed in Mosier.

For the people of Mosier, the anxiety level is still high. They fear another derailment. They know they were lucky that the wind didn’t blow on June 3rd. Back home in Chico, California, late at night, I listen to the mournful sound of train whistles as the Union Pacific cars rush through our town and I think of the people in Mosier, Oregon. I wonder if the people of Chico will be as “lucky.”

U.P. tracks run alongside the Feather River Canyon, which flows into Lake Oroville.