I attended the Bernie Sanders rally on Thursday.  Below are some of the photos I got of Bernie and the people who stood for hours in the 96 degree heat to see him and  hear what he had to say.  What will the future be like for these young people, for all of us, if Bernie doesn’t get the Democratic nomination?  If he gets nominated, I feel sure he’ll be our next president.  Bernie isn’t giving up and neither should we.

Thanks, Bill, for saving a place in the line for me. 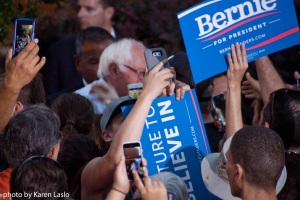