Yesterday, on the corner of Salem and 8th Sts., I witnessed the removal of an ancient Valley Oak that had occupied and shaded that corner for at least 200 years.  Just hours before, it stood straight and tall, its branches reaching into the sky.  But soon, one by one, its lateral branches and then its trunk were chain-sawed off until all that was left of it was nothing but a pathetic decapitated stump of its former self.

The tree had been condemned at a public meeting.  It was said that it had to come down because it was a danger to people and because it stood in the way of two proposed duplexes.  The developers apparently assumed that the oak was incompatible with their construction design – either you get a tree or you get the duplexes, with no alternatives in between.  As for the tree’s danger, I’m not a tree expert, but it looked perfectly healthy to me. The cut pieces of its trunk that I saw showed no evidence of disease.  I still think that, somehow, the tree could have been included in the architectural plans for the duplexes.  But it was more convenient for the developers to get rid of the tree than take the time to accommodate it in their plans. What a shame, what a loss. 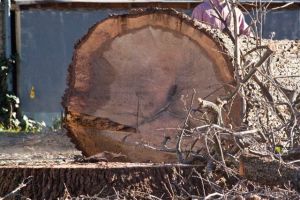 The tree doesn’t appear to have been diseased.

Pieces of the oak’s limbs don’t appear to be diseased.

Forty new trees are to be planted around town to make up for this loss.  I just hope the young, little trees survive the current drought.

Pieces of the oak’s trunk.

The oak is hauled away.