The other day I was riding my bike past the Pageant Theatre and saw that the door was open. It looked like something was happening inside so I stopped to see what was going on.

What’s going on at the Pageant?

A few days later I got an e-mail update from the Pageant folks and it looks like the iconic theater will be re-opening after some needed repairs have been done.

I’ve been mourning the loss of the Pageant ever since the pandemic caused its closure more than a year ago. It felt like a personal loss to me every time I rode by and saw the door shut tight. Before the pandemic, my husband and I would go practically every Friday night, sit in our favorite seats and watch some of the best “art house” films available anywhere.

Since the pandemic, the Pageant has been closed.

Before the pandemic, Pageant fans wait patiently for the door to open.

You can meet some of the most interesting people standing in line at the Pageant.

You might even run into a famous film maker at the Pageant.

Some patrons are so excited to be at the Pageant that they break out into song. 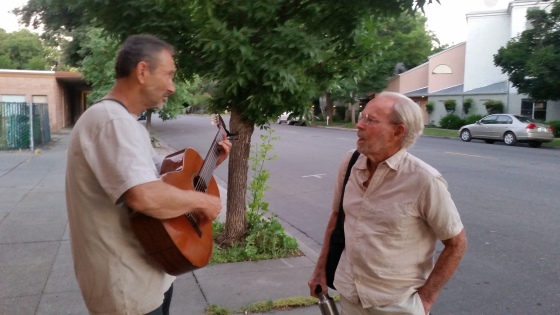 Jonathan and Lin break out into song.

When it re-opens, check out the Pageant Theatre (again)! See you there!

Minneapolis, Minnesota is a long way from Chico, California but the two cities now have something awful in common: both towns have had an African-American man killed by their own local police.

On March 17, 2017, Desmond Phillips, a young black man suffering from mental illness, was shot to death by Chico police in his father’s apartment. According to Rain Scher of Justice For Desmond Phillips, “Dave Phillips called for medical assistance because he had learned to recognize the early signs of Desmond’s mental illness before there was escalated behavior. The paramedics and the police escalated things.”  Instead of helping, the cops broke down the door, tased Desmond, and shot him dead.

I’ll never forget the day I went to Mr. Phillips’ apartment a few days after his son’s death to take photos while my colleague interviewed him. I had to try hard not to cry when Mr. Phillips told us what had happened that day. Desmond Phillips came to live with his dad, here in Chico, because the cops in Sacramento would frequently harass him and, consequently, Desmond was terrified of the police.

Vigil for Desmond Phillips outside of Chico Police Dept. 3/19/17.

Vigil for Desmond Phillips outside of Chico Police Dept. two days after he was killed.

Chico Police Chief Mike O’brien was in charge at the time of Desmond Phillips death.

It made me sick to my stomach to see how many bullet holes riddled the walls of the apartment, some of which went clean through to the apartment next door. If the students next door had been home I feel sure one of them would have been hit too. Seeing the broken, kicked-in front door and the bullet holes in the Phillips’ apartment and those in the far walls of the apartment next door it was obvious to me that the police had no hint of how to de-escalate a situation like this. They never thought to call an ambulance or Behavioral Health or pursue any number of other solutions. Desmond Phillips did not have to die. 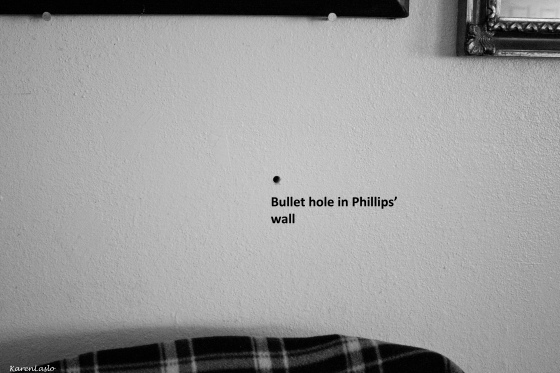 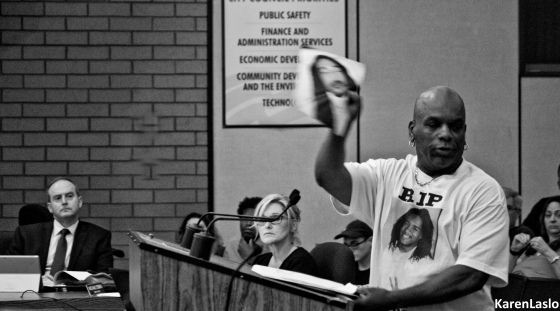 I know that George Floyd and Desmond Phillips are just two of so many African-Americans, men, women and kids, in so many towns and cities across this country, who have lost their lives due to the ignorance, hatred and violence of their local police. I’ve seen the news reports of thousands of protesters being tear-gassed, shot with rubber bullets and beaten simply for demanding that our “leaders” put and end, once and for all, to the violence and murder of our fellow black American citizens.

I resisted for a long time, but I finally made myself watch the video of Mr. Floyd as he was being tortured and then killed. I heard him, a grown man, cry out for his mother to save him.

I thought of the words to “Ella’s Song” by Sweet Honey in the Rock that sums it all up for me: