When I heard that KZFR was holding a benefit concert for Camp Fire victims with Jonathan Richman and MaMuse, I bought tickets right away. Jonathan Richman singer/song writer/guitarist is so surprisingly various that I can only describe him as kind, gentle, whimsical, modest, mischievous, friendly, and really talented. Like Jonathan himself, his songs are original, funny and meaningful. With a face of sober sincerity, I witnessed him singing from the stage of the Women’s Club about such profound concerns as “not being able to go back to cummerbunds” and “from the pitiful viewpoint of a lost dog in an animal shelter imploring the humans to please “not pass by, to choose me,” a plight that Jonathan presses until all of us in the audience are imploring someone to please choose me. Because of the quality of such story-telling, Jonathan’s narrative songs are like those of Leonard Cohen who was also strangely unconventional. I’ve always known Jonathan was a musician but was initially unaware of how famous he actually is around the world for his music. And to top his other diversities, Jonathan speaks five languages and does stone masonry on the side.

I first met Jonathan at the Pageant Theater where on Tuesday nights you can find him helping his wife, Nicole, sell tickets, where he might sing songs in Italian while giving out tickets or play classical guitar music for those of us in our seats awaiting the start of the movie. Besides at the Pageant, I also encountered Jonathan at the Sicilian Cafe where he strolled among the tables serenading customers in Italian – a scene just like those seen in period movies. On the night of the KZFR benefit, I overheard several people say they’d never really heard Jonathan perform before. I too had never heard him in actual performance, but was happy to remember his spontaneous “performances” at the Sicilian Cafe and the Pageant Theater.
Among his “peculiarities,” Jonathan has no cell phone or computer, so it’s unlikely he’ll ever read these comments of mine. But I doubt that he’ll regret missing this modest review, and will go on singing not for the notice it might bring him, but for the sheer fun of doing so. 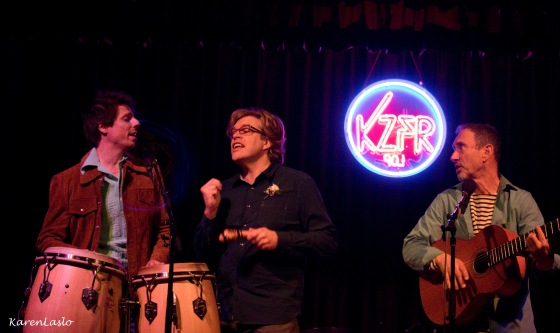 Jonathan Richman and his “percussionists” Jake Sprecher and Marty Parker (both members of the local Yule Logs band.)

Jonathan “thrumming” his his big guitar. 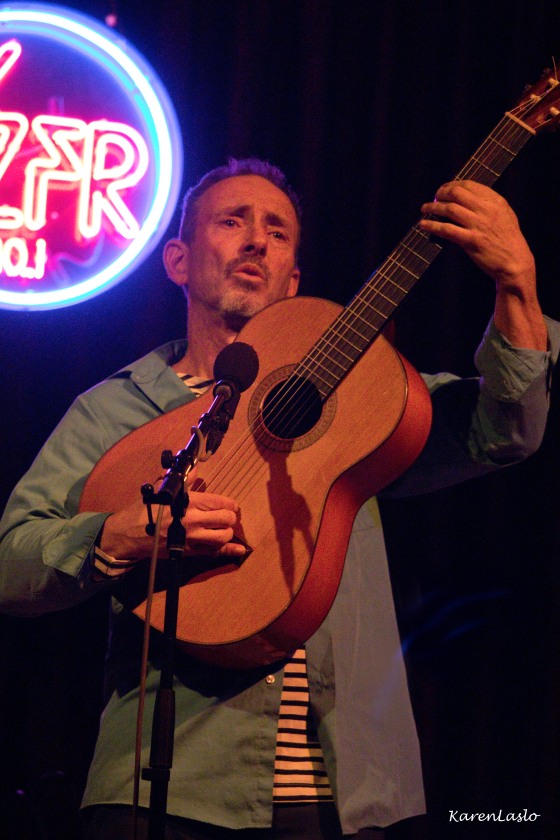 Jonathan does a little dance for the audience. 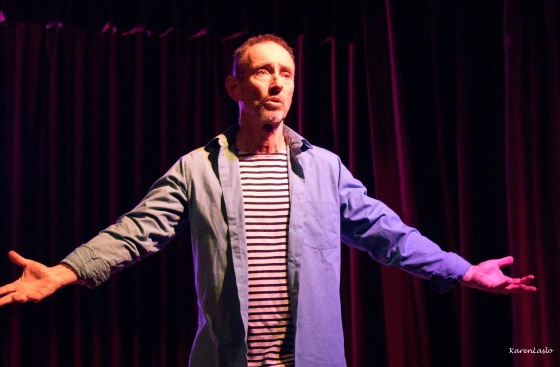 Thank you Jonathan for being yourself.