Last week at the League of Women Voters Forum, our current Representative to the U.S. Congress, Dist. 1, Republican Doug LaMalfa, perpetuated the Republican lie that Planned Parenthood, a women’s health clinic, makes “a profit” from “selling baby parts” from its “abortion industry.” At the start of the forum the League warned the audience not to clap or show support for, or against, any candidate. But when LaMalfa mouthed these shocking lies there was an audible gasp from the people listening that they could not suppress. 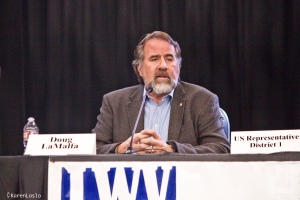 As LaMalfa’s opponent, Democrat Jim Reed, correctly pointed out, Planned Parenthood does not get any federal funding for abortions (see link: http://www.factcheck.org/2011/04/planned-parenthood/.