Two long-time KZFR Programmers were re-united on the Peace and Social Justice Program (Fridays, 11:30am – 1:00pm) during the Spring 2015 Pledge Drive. Chris Nelson who started the program returned to interview Laurel Avalon Yorks who took over the program after Chris retired as host. Since retiring from the program, Chris, along with her late husband, Michael Pike, pursed a life dedicated to, and promoting, environmental, peace and social justice activism throughout the U.S.

For more than 20 years, Laurel produced hundreds of live, thoughtful interviews with local and national peace and justice advocates, authors, poets and writers. Now it’s Laurel’s turn to be interviewed by Chris on the occasion of Laurel’s retirement from the program. However, the Peace and Social Justice program continues with Chris as one of its alternating hosts. 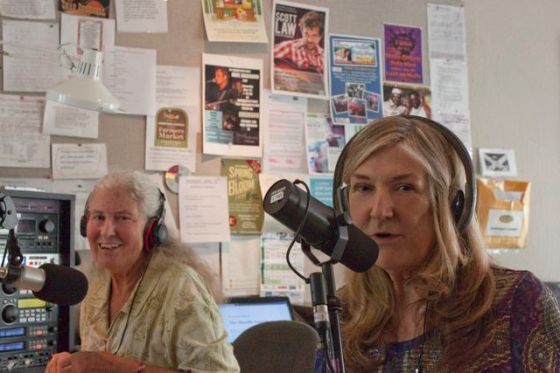 Laurel and Chris after their program. They raised a $1,000 bucks for KZFR! Yea!

As one of many phone volunteers I want to thank all you listeners who, through your generosity, helped KZFR 90.1 surpass it’s goal of $50,000 during the Pledge Drive.