The most recent City Council Budget Update meeting was notable for whom it did not hire and who it did hire.  The council, at the recommendation of City Manager, Brian Nakamura, voted to not hire at this time the recommended Economic Development Manager but chose instead to hire a Senior Maintenance Worker for the sewers department.  After hearing about the disastrous flood that occurred in Colorado, normally an arid state, this was good news to me.

Three years ago on September 8th, I was walking downtown when it started to rain.  I was on the corner of E. Sacramento Ave. and the Esplanade when the heaviest downpour hit, and, in an instant, the sidewalk and street disappeared under a river of water and I found myself wading in water up to my ankles.  When the water eventually subsided, I saw that the street drains were clogged with leaf debris and trash.  Though the city maintenance workers typically clean the drains out before the rainy season starts, no one expected such a huge storm so early in the season.  So this year when we had our first pretty good downpour on Saturday, and what with the city workers being laid off, I remembered my earlier experience. 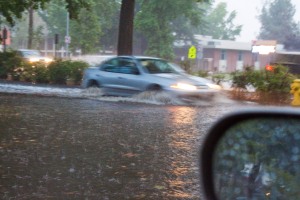 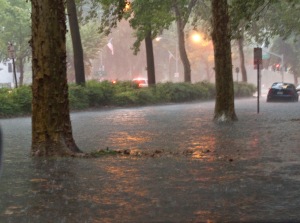 E. Sacramento Ave. storm drain today. Citizens can help by cleaning up the debris from the drains on their street themselves.

We need to attract investment by high tech companies offering good paying jobs in Chico, and of course that’s what the proposed economic Development Manager would be hired to do. But what “high tech” corporation or progressive business of any sort would want to locate in a town where city services have been cut so much that there’s no one to haul dropped branches away or prune the city trees and where the city has to close its treasure of a park for lack of adequate staffing?  And who would want to invest in a town where its employees would have to commute through flooded streets with clogged drains?

Even from a purely business perspective, the Council made the most sensible decision under the circumstances. A Senior Maintenance worker makes about $40,000 a year.  The Economic Development Manager would have made about $105,000 a year.  The Council had the good sense to not hire such an expensive employee but instead hired a worker that will help to keep our town safe, clean, and attractive to future investors.  When that’s accomplished and city services are restored, and the sewers run unimpeded and, yes, the potholes are finally filled in, it might be time to consider hiring an economic consultant.