It’s easy to think of the “homeless population” as less deserving, as “transients,” who aren’t really from Chico, who are “lazy,” who are “criminals,” or who “choose” the “homeless lifestyle.” “They’re dirty and only make a mess of our parks.” This narrative makes it easier to justify the punishment and ridicule of all homeless individuals, but not really seeing them as individual human beings. There aren’t really “three kinds of homeless” as Erik Gustafson, Director of Public Works, tried to explain to me on the day he oversaw the eviction of the homeless campers living in lower Bidwell Park. I don’t believe that anyone would choose to live in a tent, in the mud, in the middle of a cold and wet winer without dire reasons. The truth is: a growing number of homeless people in our town are senior citizens in the age bracket of some of the City Councilors’ parents or grandparents. Many are elderly women.

It eases our conscience to think of the homeless as the “other,” outside of ourselves, when we bulldoze their belongings into a heap and then dump them into a dumpster. We don’t want the homeless to be visible. We just want them to go away and hide so we, and our children, don’t have to see them. It makes it easier to vanquish our uncomfortable thoughts.

I know that some of the current counselors, city staff and City Mgr. Mark Orme, are practicing Christians and I call upon you to follow the teachings of Jesus Christ who did not turn away from the poor and homeless. Do not make policy, or vote in such a way, as to merely fulfill a campaign promise to rid the town of “transients” who “don’t really live here.”

Instead, go by the universal Golden Rule: “Do unto others as you would have them do unto you.” A specific example of the Golden Rule is expressed by Jesus in his own words, Matthew 25: “Truly I say unto you, to the extent that you do unto one of these brothers of mine, even to the least of them, you do unto me.”

Elderly homeless man trying to clean himself in Sycamore Pool 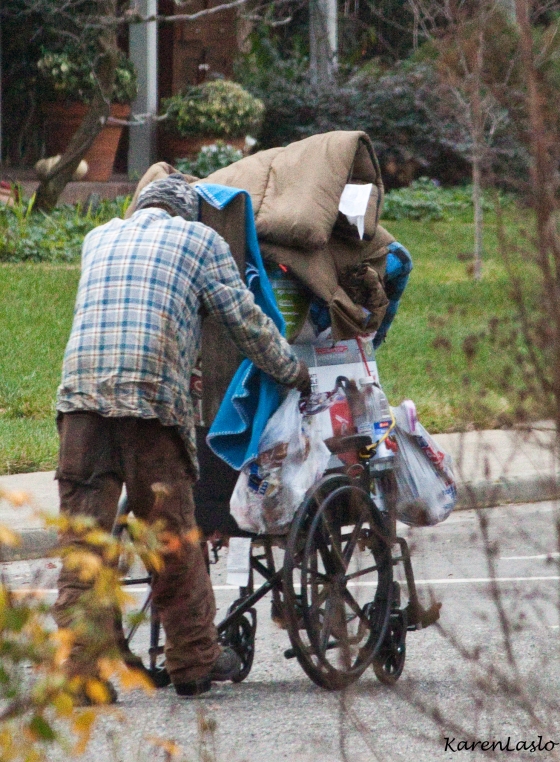 Homeless man walking down my street

On May 30th of this year I went for a bike ride towards the new courthouse. I hadn’t been out that way for quite a while so I was surprised to see that there were still Camp Fire survivors living in FEMA trailers, even as houses and apartment buildings were being built around them for Merriam Park. (See photos below.)

In general, I agree with the Smart Growth Advocates’ (SGA) five policies (Link: https://chico-ca.granicus.com/MetaViewer.php?meta_id=74156). But, to me, their first point is the most important: Chico needs more affordable housing.

I’ve heard about two new proposed developments, “Stonegate” and “Valley’s Edge.” But they just sound like the same old sprawling developments that practically no one will be able to afford, except maybe some wealthy people from southern California or the Bay Area seeking a more rural and less hectic lifestyle. When new developments are sprawled out on the edges of towns and up into the foothills they get new infrastructure, such as streetlights, sidewalks and nice new streets without potholes, crumbling curbs and gutters. And, even though developer fees have been raised, it’s we, the taxpayers of Chico, who end up subsidizing new development infrastructure without reaping any of the benefits. And our current sewage treatment plant will need to be expanded to accommodate any new large development. This expansion will be quite expensive, and, again, Chico residents will end up subsidizing the expansion by an increase to their sewage tax bill. The developers won’t admit it, but the truth is, new development never pays for itself.

Meanwhile, the inner city, made up of classic traditional neighborhoods like the “Avenues,” the “Streets” and the “Barber” neighborhoods, will start to crumble and decay with no financial support or hope for revitalization.

And for all the reasons that the SGA have stated in their five policies, unlimited growth is not environmentally, financially or morally sustainable.

I urge the current city council to adopt the SGA’s five policies.

FEMA trailers with Merriam Park in the background.

To the right of the FEMA trailers are new streets, lights and sidewalks at Merriam Park. 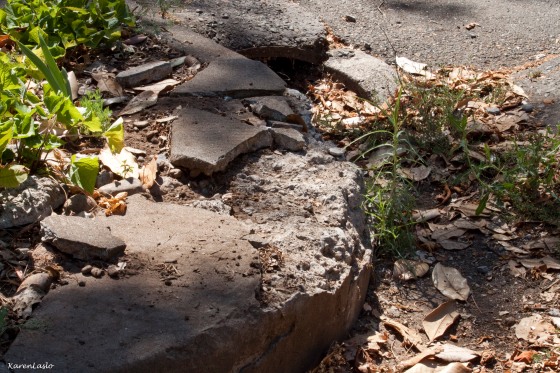 Crumbling infrastructure in the “Streets” neighborhood.

New houses going up along Hwy 32 up into the foothills. I don’t think the people camping in the Park or living in the FEMA trailers will be able to afford these houses, do you?

Just a few local developers have bought up the valuable land for development projects that will make them lots of money. The Humboldt Burn Dump is in the background.

When Chico city council candidates take large contributions from developers or from Political Action Committees (PAC), (such as Assemblyman James Gallagher’s PAC) then they’re beholden to those contributors.

Nobody should have to sleep in a bus shelter even if they’re a homeless person with a mental illness.

At it’s first city council meeting on 12/8/20, the new conservative, Republican majority (Kami Denlay, Deepika Tandon, Kasey Reynolds, Andrew Coolidge and Sean Morgan) voted to make breaking any of the Park rules a misdemeanor, punishable by a fine or jail time. These rules include: no smoking in the Park, no alcohol in the Park, no dogs off leash after 8:30a.m., no dog leash longer than 6ft. and, of course, no camping in the park. The new ordinance is aimed directly at the homeless people who are living in tents in the Park. In the middle of winter and in the middle of a pandemic, the question everyone keeps asking is, “Where will they go?” Good question.  It’ll be interesting to see how the Trump supporting, right-wing extremists on the city council will deal with that question. 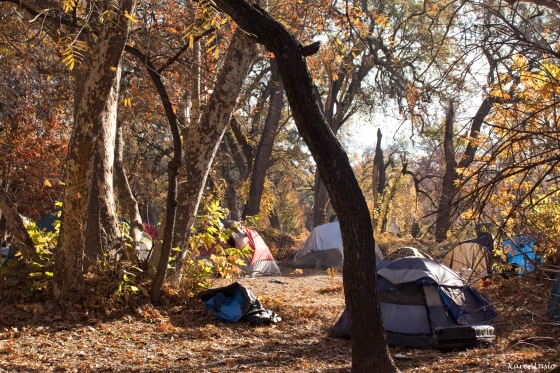 Homeless people camping in the Park by the horseshoe pits.